Electric distribution circuits consist of numerous passive and active components, including wires, switches, capacitor banks, transformers, voltage regulators, clamps, insulators and fuses. Most of these components provide decades of trouble-free service, but eventually, they fail. Typically, utilities perform scheduled maintenance on some types of components, particularly those with relatively low numbers, relatively high failure rates, or high failure consequences. Because of the sheer number of components on a distribution circuit and their geographical dispersion, inspecting all components on a distribution circuit requires too many resources, and generally is not performed. 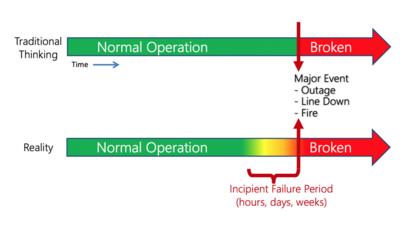 While some equipment failures occur precipitously, such as when a tree falls and breaks a wire, many equipment failures are the culmination of an extended process, which can initially manifest as service problems like flickering lights or repeated, self-clearing, overcurrent faults. These service issues generally occur intermittently, sometimes weeks or months apart, making it difficult for responding crews to diagnose the root cause.

Technology developed over the past decade offers the possibility of a new operating paradigm for distribution circuits. As apparatus fail, they produce distinct electrical signatures, which can often be detected in voltage and current waveforms measured at a substation. Over a decade of research at Texas A&M Engineering, in partnership with EPRI and over 20 distribution utilities, has resulted in a technology known as Distribution Fault Anticipation (DFA), which automatically detects many common equipment failures, allowing utilities to fix the underlying cause before it results in a sustained outage.