Some power system failures occur precipitously, like when a tree falls and breaks a wire. Many failures, however, are the result of an extended process, which may last for a period of hours, days, or even weeks. 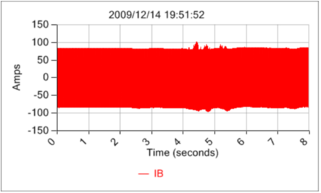 As equipment fails, it produces distinct electrical signatures, which can often be detected in voltage and current waveforms measured at a substation. In their early stages, these signatures are very small - usually much smaller than normal system load variations. For example, the graph shows a failure of a clamp, barely noticeable in the presence of normal loads.

DFA-Plus devices, using Distribution Fault Anticipation technology, sensitively monitor substation currents and voltages for signatures associated with the early stages of equipment failure. When a DFA-Plus detects a problem with a circuit, it automatically informs the utility company, allowing linemen to repair the problem before customers experience an outage.